Straight form the trade: Mini is a very vocal Eagle that was probably taken from the nest by poachers. It’s a type of habituated behaviour that we see with a lot of animals from the trade after there was human contact in a very early stage of their life. Different from eagles that have lived free in the wild, Mini adapted to much to a captive life with humans influences. Happily we can offer Mini a relatively spacious enclosure that we realized last year. There we can keep the human interaction relatively low, and hope that her habituated behaviour changes so we can start the rehabilitation process. 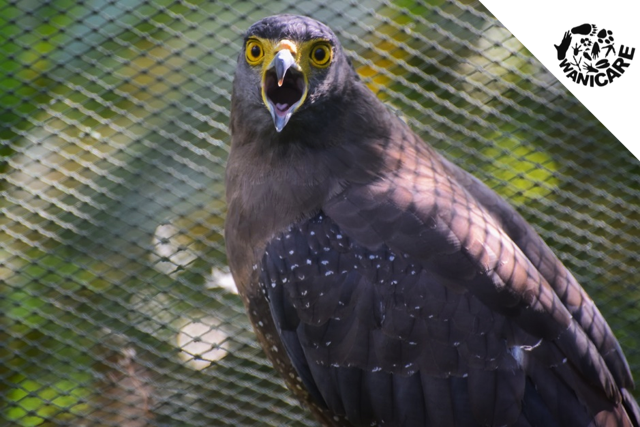 Crested serpent eagles are considered not-threatened and therefor almost nothing is under taken for this species to protect them. So we find more and more of this species in the illegal trade. Not only does this indicate that the this species could become threatened later in time, but the we are deeply worried about the many individual Crested serpent eagles that are victim of poachers, traders and private owners that handle and keep them in terrible ways.

For the eagles from the illegal trade the Cikananga Wildlife Center and Wanicare started the Raptor Release Program. This program aims to take care of traded raptors, rehabilitate, release and monitor after release. We have been successfully releasing raptors in the past years and more release are coming up in the coming period. More info: http://www.wanicare.com/our-projects/raptor-release-program

In the July and August of this year we share a series of photo’s we call #AnimalsofCikananga. With this series we hope to give some insights and backgrounds on the rescued animals that are here in Cikananga and are so typical for the many challenges wild animals face in Indonesia.

Of course, we also hope to raise some extra attention to the work we do for the animals, the –very often-  tragic situations and hope to find some help, financially or otherwise. Please like, share, tag and tell your friends, and help us save the wildlife: www.wanicare.com/donate