11 September 2019 – In October 2018, Cikananga Wildlife Center said goodbye to the two beautiful young female orangutans, Femi and Rosie. At the time they were ready for the next step towards freedom in their natural habitat in Sumatra – by Rere Faradina Puspita.

Rosie and Femi arrived in 2016 at Cikananga, after been rescued from the traumatic illegal wildlife trade, where Rosie was even found in a post package! At Cikananga we tried to compensate this terrible experience after they arrived. We put much time in enabling Femi and Rosie to learn wild survival skills as much as possible at their young age. So multiple times per day they were outside, with the Cikananga vet or Hanneke, where they learned to climb, find food and stay physically fit.

But our greatest wish was to translocate the two young orangutans to a specialized center called SOCP, what happened now a year ago. Now nearly a year later, we receive really good news that they are moved to the next step : They have been transferred the SOCP Orangutan Reintroduction Center in Jambi, managed by SOCP’s partner, the Frankfurt Zoological Society. 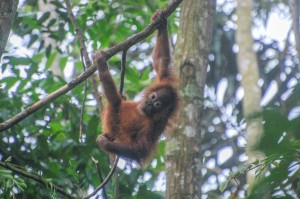 It is a semi wild reintroduction center that focusses on the rehabilitation of different orangutan candidates for release until they can be fully released to the wild.  Giving Rosie and Femi a chance to go back to the wild is one of the main reasons why we work so hard to help Indonesian wild animals at Cikananga. 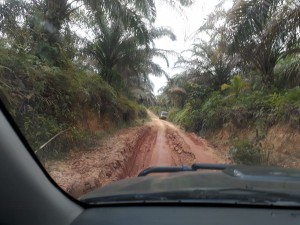 Hanneke was the primary caretaker of Femi and Rosie for more than two years at the Cikananga Wildlife Center. She finally got the chance to fly to Sumatra and visit the two young orangutans in the new environment. After the Jakarta-Jambi flight, she had to continue her journey by car for 5 hours to get to the reintroduction center where Femi and Rosie are today.  Arriving in the afternoon, Hanneke was just in time to see the last feeding of the orangutans for that day. Welcomed by the staffs, keepers, and veterinarians, she was invited to join them on the feeding.

Suddenly, there was something different from one of the orangutans. One of them made a loud happy noise when Hanneke and the group arrive on site. Of course, that was Rosie! Femi also moved a bit closer and showed interest to Hanneke by stretching her hand. After taking care of them for more than two years, the orangutans clearly still remember her. It was a very emotional and happy moment for both Hanneke and the two orangutans. Even today Hanneke still has no words to explain what she felt at that time. All the exhaustion of the long trip dissapeared and turned into happiness. It was a really happy afternoon in the Reintroduction Center.

Both orangutans are doing really well and are healthy. Femi looks a lot more mature and larger compared to the time she left Cikananga, while Rosie is still the same old Rosie: Always happy, playful and still looking great! They are not in the same enclosure anymore because Femi is already a candidate for release, probably sooner than Rosie who needs a bit more time rehabilitating. Femi is placed with two young male orangutans. While Rosie still needs to go through some extra steps for rehabilitation it is expected she can be released to the wild as well. Rosie now lives in a enclosure shared with three other young orangutans, including Cice, her new best friend. 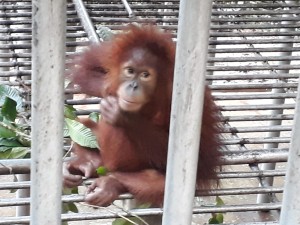 Hanneke returned to Cikananga after meeting both Femi and Rosie. She spent one night there before here return to Java the next day. At the time she could’t wait to share this amazing experience with all the people in Cikananga Wildlife Center who look forward to hearing about the lovely Femi and Rosie. She hopes both of them can soon be released to the wild and live happily there. She is very thankful for the opportunity to visit the girls again!