Very soon we will start with the building of a new enclosure for our orang-utans Noni and Dodo (and for other orang-utans that may will arrive in the future at Cikananga Wildlife Center).

Noni and Dodo arrived at cikananga in 2008, they were kept as pets by a family in Bogor. Both of them were bought at a marked in Jakarta as babies. The first few years they lived inside the house as part of the family. When they grew bigger, were more curious and started to break stuff, they were moved outside the house in a terrible concrete, barred cage. There was no furniture or anything else inside the cage! They lived in this cage for a few years until the owner realised this wasn’t a good situation for Noni and Dodo and handed them over to PPSC.

When they arrived in Cikananga they were in bad physical condition, especially Dodo. He was skinny and had a terrible appearance. Both of them were very attached to human, they loved to get attention and didn’t show much natural behaviour. Until November 2010 Noni and Dodo were housed in a cage normally used for small primates. The reason was a lack of a bigger cage for them that was ‘’orang-utan proof’’. Besides that, we didn’t expect them to stay so long in Cikananga. Happily with the support of Orangutan Outreach we could prepare 2 of our carnivore cages for Noni and Dodo. In December 2010 they were moved to this enclosure.

Noni and Dodo didn’t showed much natural behaviour at arrival in Cikananga. From the beginning it was clear to us it would be very difficult to release these two orang-utans back to their natural habitat. Even with this knowledge we hoped, with the right care and rehabilitation, it would be possible to release them back to the wild. We’ve tried to send them to Nyaru Menteng. We started the procedure for the translocation in 2009 and in 2010 we received the Ok from Nyaru Menteng (NM). But after the arrangement of the SATDN (permits), NM refused it because they were full again. After this we tried to move them to Bali Zoo, which wanted to make an island for them inside the zoo. Unfortunately, after arranging all the permits, the animal transport in or outside Bali wasn’t allowed anymore because of rabies. In the beginning of 2012 we tried to arrange the translocation to NM again, but NM was still full. 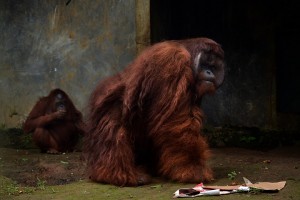 Even if they would’ve had space, they weren’t sure they wanted to have Noni and Dodo. They were already two big orang-utans at this time who had lived in captivity most of their lives. The chance they could be released back to the wild is very slim.

Because the change that we will find a good permanent home for them is very slim we decided that we will give them lifetime care in Cikananga Wildlife Center. Therefore we will make a new enclosure for them with a lot of space so we can give them the best possible life in captivity. 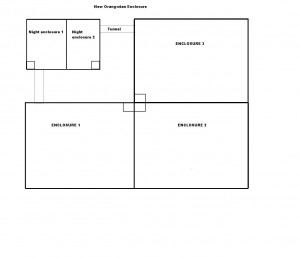 PLEASE SUPPORT US SO WE CAN GIVE NONI & DODO, BUT ALSO OTHER ORANG-UTANS THAT ARE IN NEED OF HELP A GOOD HOME WITH THE BEST POSSIBLE CARE.