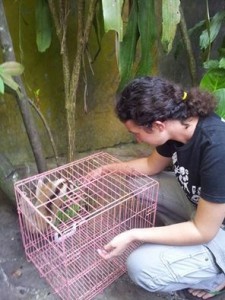 On the 5th of August Slowloris Listrika was brought to Cikananga Wildlife Center.

She was found in a electricity box by the Little Fireface project (LFP) team, to make sure she was alright and healthy she was brought to us. After medical check-up by our vet and after observing her behaviour she could return to LFP on the 10th of August. Here she was placed in a habituation enclosure in the release area. After 3 days the door of the enclosure was opened and Listrika was free again!

End of August our slowlorises Lia & Billy K. Will be released as well!